The Elk River Fire Department's long history dates back to 1881, with the first offi 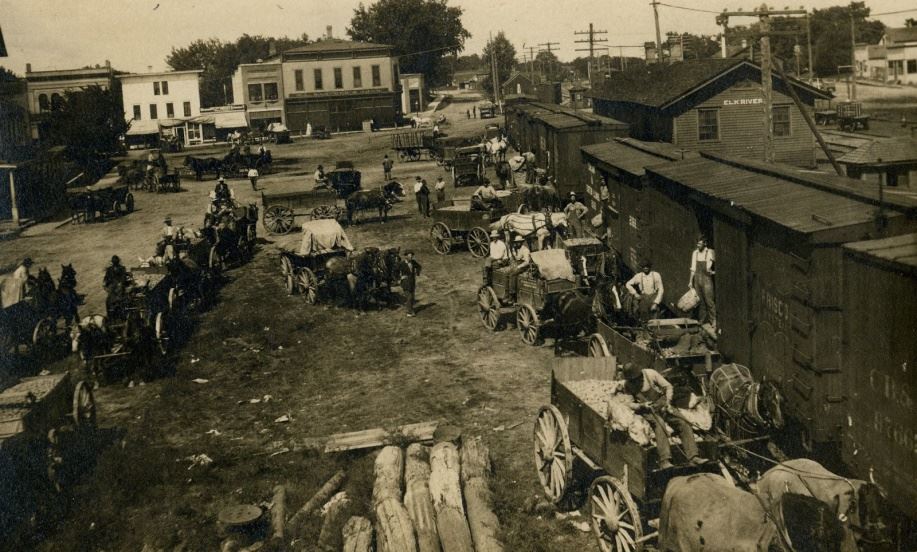 cial mention of the Elk River Volunteer Fire Department after a Burrell’s Cash Store in June of 1898. The first official purchase of firefighting equipment was sometime before April 1898, to protect the business district. Sanborn Fire Insurance Maps indicate 600 feet of hose was stored at the Great Northern Railroad Depot to be connected to the railroad water tank in the event of fire.

Prior to 1898, the community utilized a “bucket brigade," meaning they relied on every available citizen to assist in passing the bucket from the water source, back to the fire.

Fire and Reconstruction in Elk River

Fire swept through Elk River in April 1898, which led to the rebuilding of the business district.

The event that everybody in Elk River had been momentarily expecting for the past twenty years devastated the community. The town and most of its buildings consisted of wood. When the fire started in the back of S.C. Brown dry goods store, it swept through the town causing $50,000 in damages.

Originally, railroad tracks split through the middle of the business center of Elk River. Immediately after the fire many merchants expressed regret over the division of the Elk River business district. In the days after the fire, plans were developed to move downtown center of Elk River to the south side of the railroad tracks. The businessmen also determined the entire downtown would be built of brick.

The results of the plans to move Elk River were dramatic. Building the Houlton Block and the adjoining opera house, the Merchants Hotel, and other brick and stone buildings temporarily generated a shortage of brick and other building materials. In spite of the challenges, by December the local newspapers reported the rejuvenation of downtown Elk River. “Today we can point with pride to as compact and substantial a business center as can be found,” the Sherburne County Star News reported.

Following the devastating fire of 1898, The Star News reported that the Houlton Block building installed a “system water works” running through the building with the help of a “hydraulic ram” (August 3, 1899).

The fire company was organized on July 15, 1915 during a special meeting. A plan was detailed and adopted with emphasis upon the efficiency of the chemical engine and advised Elk River to procure one of these engines at once.

Chief Ringer of Minneapolis stated, “The social end must be looked after and above all things keep t 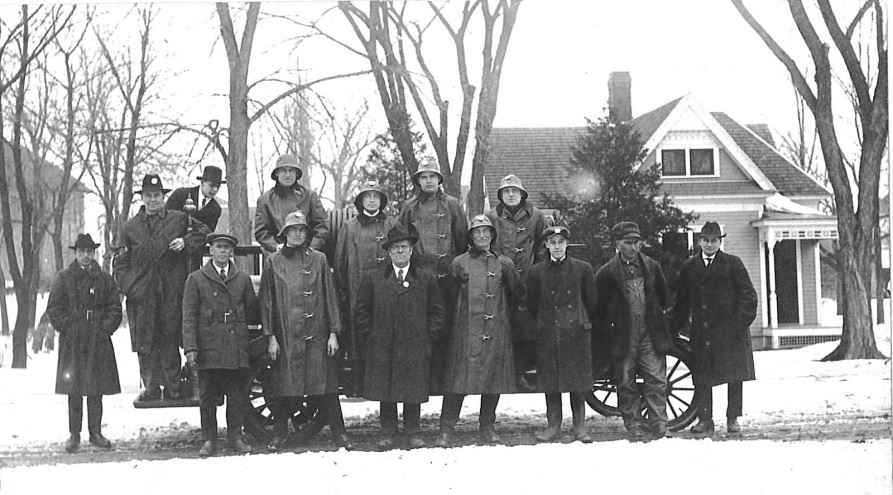 he boys interested and ready at all times to respond when the alarm is turned in.”

The first known Official Charter Members of the Elk River (Village) Fire Department were appointed at this same meeting.

The fire of 1915 pushed the issue of fire protection to the forefront of town council discussions. This culminated with the construction of the Elk River water tower in 1920. The water tower is currently a historical landmark (out of service).

Due to the possibility of increased insurance rates, the Mayor decided to call a public meeting to reorganize the fire department. (Article: April 1919)

In September of 1919, the Houlton Investment Company donated a suitable site on Quincy Street for a new fire house. The fire house was to be on the south side of the tracks in downtown due to railroad crossings being blocked by trains. (Article: September 25, 1919)

Construction of the 34x43 feet fire house began on October 16, 1919. The village council decided that the fire house would be built by day labor versus by contract to save money. The larger portion was to be used for housing the fire apparatus, there was a meeting room for the village council, and the rear contained the village lock-up.

The equipment committee was instructed to purchase coats, hats, and badges during a regular meeting on January 4. The committee later purchased badges, 6 hats, 6 coats, and 3 gas masks.

The village council decided to purchase a modern fire siren on January 6, allowing for a more complete fire alarm system. The siren was to be operated automatically from the telephone central office when an alarm of fire was turned in. A system of signals was developed so that everyone would know what section of town the fire was in. (Article: January 6, 1921)

The fire siren was installed on the water tower on March 10 and could be heard as far as a half a mile away. The siren was run by electricity and was connected with the telephone exchange so that the operator could give the alarm in case of fire.

On February 24, Firefighters held a meeting to discuss forming a Relief Association. A committee of three was appointed to draw up a constitution and by-laws to be discussed and later adopted.

During a regular meeting on April 2, the secretary was instructed to write the Zimmerman Council to inform them that no charge would be made any time they felt like calling the Elk River Fire Department for assistance.

A special meeting was held in February 1937 to decide what compensation should be paid to one of the firefighters that sustained an injury at a fire on December 24, 1936. It was decided that a claim would be sent to the "Volunteer Fireman's Benefit Association of Minnesota". (Meeting Minutes: February 1937)

In October 1956, paperwork was filed to make the Elk River Fire Department an official corporation with the purpose of the corporation being to alleviate emergencies through owning and operating an ambulance or other emergency vehicles. The filing fee was $12.60 and the paperwork was signed by 24 members. (Corporation Application: March 25, 1957)